Twenty eight members turned up for this month's melee, including a welcome return of Nan Chadwell and new girl Shirley O'Brien.

So, seven groups in 14 teams of 2 were drawn by card and they eagerly gathered on the pistes.
Round one was a strange affair. A few teams experienced good wins and were soon sitting down in the warm sunshine awaiting the rest to finish. However, a couple of teams scored slowly and took longer to finish. Harry O and Tony Morton took the early lead by winning 13-1. A score predicted by Jackie.

Round two and another win for Harry and Tony M, with cumulative scores of +17 and +23 respectively, but Ian Greaves got a second win and split the pair with a +21. So with 9 players holding 2 wins, the final result was wide open.

This second round went on for quite some time for a couple of groups, so the draw was made in the interim to allow play in Round 3 for those teams that could muster teams.

Round three and Harry lost his 3rd game by a really close result of 13-12 to Christine C and Christine K. Well done ladies.

Meanwhile Tony M also lost and the winners of all three rounds were reduced to 5 players.
Who would come out on top?

Well, a quick reminder of the points scoring system.

You get 1 point for just turning up and playing 2 games minimum.
Plus a point for each win, so that's 4 points.
The top 3 players with three wins and the highest cumulative points difference get another point for 3rd place = 5 points. Second place gets 6 points and 1st place gets 7 points.
These scores accumulate over 12 months to determine the top male and female players for that year. Only two more months to go.

So October's winners were...

Unfortunately, we couldn't take a photo of the presentation due to not having the trophy.
Hopefully we can get one added later.

Well played everyone. It was worth noting that nobody scored a zero, so the Fanny Trophies remain in their boxes for another month.

So after the October Melee the overall places are as follows

In top spot with 33 points is Kevin, in joint second place are Harry and Dave B on 32 with Jim and Steve in joint 4th on 29 points 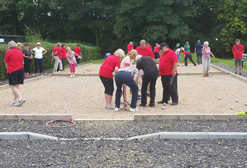