Quite an overcast sky but bright and warm with no breeze at all.

The morning session commenced with 16 members playing in 4 teams of 4 still under Covid rules.
It was nice to see Fred and Viv turn up at both the morning and afternoon sessions to say their farewell.

There were quite a few close run games at 13 - 10 and 13 - 11 resulting in 4 members with three wins with only a couple of points difference between them but Dave Boyne was the highest scorer in the morning crowd.

The afternoon crew arrived and much depleted as Fred and Viv and Brian and Ann, Nev and Sue, Colin and Patricia and Steve and Lucy were otherwise engaged.

There were only 11 players which meant one group of two triples and the other group of a triple and a pair.

As usual the groups swapped around to make things as equal as possible. Jackie was in attendance as official scorer.

None of the players in Harry's group could muster 3 wins, but Ian and Harry did manage to score 13 - 0 against the three ladies. Such a pity we only have two fanny trophies.

As the games ended, the other group had two members on opposing sides who could end up with three wins and be in with a chance of being champion for this month.

As it turned out. Chris Hopkins scored his third win and secured victory over the morning players with a convincing points difference.

Commiserations to Sandra who having scored 3 wins and +13 was only just outside the placings.

Harry presented Chris with the Anne Overend Memorial Trophy to the applause of the other players. 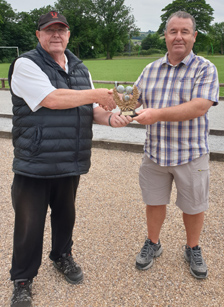 It was so lovely to see Viv and Fred drag themselves away from packing, to come down to both sessions to say 'Au revoir', not 'Goodbye' as they will be returning to visit. We wish them every luck in their new venture in Louth and look forward to seeing them again. We also wish Ann and Brian a happy life in Spain.

Walter will be 91 on the 15th July. Early wishes for a very happy birthday, Walter. We miss you and hope to see you speeding down the park drive very soon!