Another beautiful weather day. Wall to wall sunshine and warm too.

Nineteen members turned out for the morning session and spent some time clearing litter from around the terrains and football field and some broken glass bottles from around the bench seats. Well done crew.

We had one new member taking part in her first Monday Melee, welcome Jan and well done on buying some impressive Obut new boules.

Teams were selected at random and you couldn't get more random than how Harry selected them.
The groupings were formed by using three groups of five members and one group of four members. The group teams changed within their group after each game.

The first game resulted in a 13-0 drubbing for three members and a brilliant start for two.
Could those winners keep up their early success. Last month's amazing winning result from Paddy would be hard to replicate, and so it proved as the morning wore on. Meanwhile all members had good moments as well as some dire results.

Harry found scoring a bit difficult without his reading glasses but Jackie sorted the odd mistake for him. I think at one point he fell asleep in the sun. One game went on quite a bit and it was 12:30pm before it ended.

By the end of the three games, four members had achieved three wins. Three of them were joint 2nd place for the morning session with the same points difference, only Robin was out in front, but would his points difference be good enough to beat the members in the afternoon shift? Time will tell.

By 1pm the afternoon 18 members arrived. Harry once again did his random selection of teams. It was even more random than the morning session but at least there were no married couples playing in the same teams.

Harry's first partner was Carol Cropper, and what a partner she turned out to be. We were playing against Colin Child and Michael Kinder and it looked like another fanny score was possible but eventually Colin and Mike got a point with much relief. Harry and Carol cruised to an easy win.

The second game Harry partnered with Colin and Harry was showing some remarkable shooting skills beating off Carol's accurate pointing.

On piste number 7 Neville and Carol were taking on Chris and Rod and at one stage it looked all over for Nev and Carol but some excellent pointing by Carol and a couple of lucky shots by Nev gave them victory 13-12. Their second game was another nail biter with Nev and Rod winning 13-12. This result was helped by poor Chris who forgot to throw two of his boules one of which could possibly have given them victory. Hard luck Chris.

The last game was a bit less exciting and Nev and Chris ran out winners 13-4.

Jackie had come in to do the scoring and her score sheet was much neater than mine. I think only one member scored three wins this being Nev, but he didn't have a bigger points difference than this mornings players. So the results were as follows ....

In joint second place with 3 wins and +19 were Steve Sharpe, Sue Metcalfe and Kevin Hepworth who all scored 6 points.

The outright winner with 3 wins and +21 was Robin McDermott who scored 7 points. 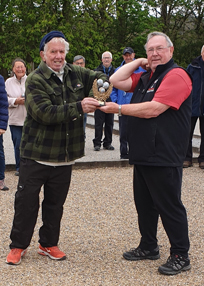 It was Rod Green's birthday a couple of days before today and Cheryl brought in some wonderful Butterfly cream buns. They were really nice thank you Cheryl and Happy birthday Rod.

Today's results mean that Paddy has hung onto the top spot but Steve has joined her as joint number one with Neville in third place. 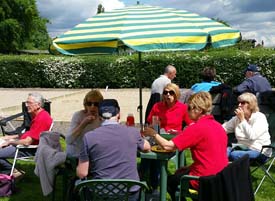