The weather was dry with a cold breeze and rain threatened for later on.

After two games and darkening skies, it was decided to go into the clubhouse for tea and biscuits and Harry had devised one of his famous quizzes, this time all about Mirfield. So one would have thought lots of our members would score highly.

There were 60 questions including pictures mainly of historic Mirfield, but still relevant today.

After about 45 minutes of head scratching, it was time to reveal the answers.

It was not as easy as Harry had thought. Many "oh's" and "ah yes" exclamations eminated from various team members. But at the count up, it was Ruth's team who won convincingly, scoring 29 out of 60. Ruth was the brains of her team leaving other team members to believe that Ruth had lived in Mirfield in a previous life to know so much about the place.

No prizes were given out, but kudos to Ruth and her team for a good effort.

Harry came to the conclusion that most members must walk about with their eyes shut, but to be fair, there were a few off-cumdens and two from somewhere called Leeds.
Anyway, another happy bunch of boulisters left with a lot more knowledge about this wonderful town than when they arrived. 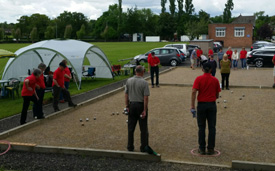