A fine but cold day tempted 40 members out for the first Month End Melee of 2020. This year we would be playing for the honour of lifting the Anne Overend Memorial Trophy in memory of our secretary's wife Anne who is sadly missed. 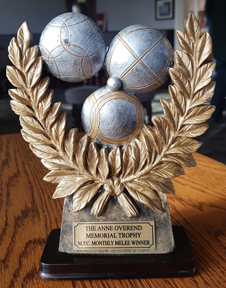 Numbers were selected and matches in Round 1 got underway at a little after 1pm and with 40 players milling around the pistes have never looked as busy. First blood was to Michael T and Michael K beating new girl Nan and not so new Robin 13 - 3. Good start. Most of the other games lasted a bit longer but at the end of the round +10 was the lead score with Nev and last year's champion Jim C on +7.

On to Round 2 and with a good win for Nev with his partners Patricia and Ken, Nev found himself in the lead at +16 with Ruth close behind on +14 and Jim C on +12.

All to play for in round 3. Unfortunately for Nev he was up against last years runner up Colin who was partnered with Ian and Nan. Nev's team was Michael T and Fred. This was going to be a good game and it was. Neck and neck to the end with Nev's team just nicking it at 13 - 12. Other results were checked and in total 7 people scored 3 wins. Well done to all.

Off into the clubhouse to check the arithmetic and while Harry was doing this everyone was enjoying birthday cake supplied by Michael Tan, Happy Birthday Michael. It was also nice to have the heating back on. Well done to everyone involved in that.

Then the all important scores.

In third place with 3 wins and +15 was Carol D. In second place and preventing a female whitewash (I nearly said a rose between two thorns but I daren't) was Nev on +17. But in first place and the proud recipient of the Anne's trophy was befittingly a female member - Ruth with +21. Well done Ruth.

To wind up a the proceedings we sang Happy Birthday to Michael and also to Carol whose birthday is midweek and Harry gave a few details about up-coming events which can be read about on the website. 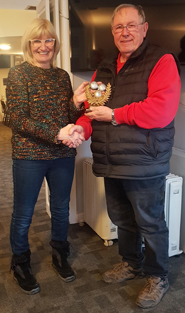 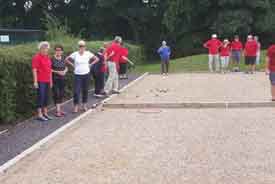