On a cold and blustery day Mirfield Petanque Club had a record turnout with 42 members turning up for a Monday social melee. The weather was mixed and a cold wind was blowing off the Urals and across the terrains but this did not deter members from enjoying three games of petanque.

At least ten regulars were absent so we could have had around 52 players which would have meant a ballot as only 48 can play on the 8 terrains. The possibility of playing on the car park was considered. 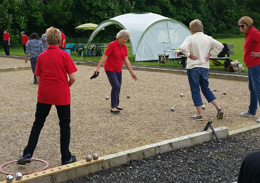